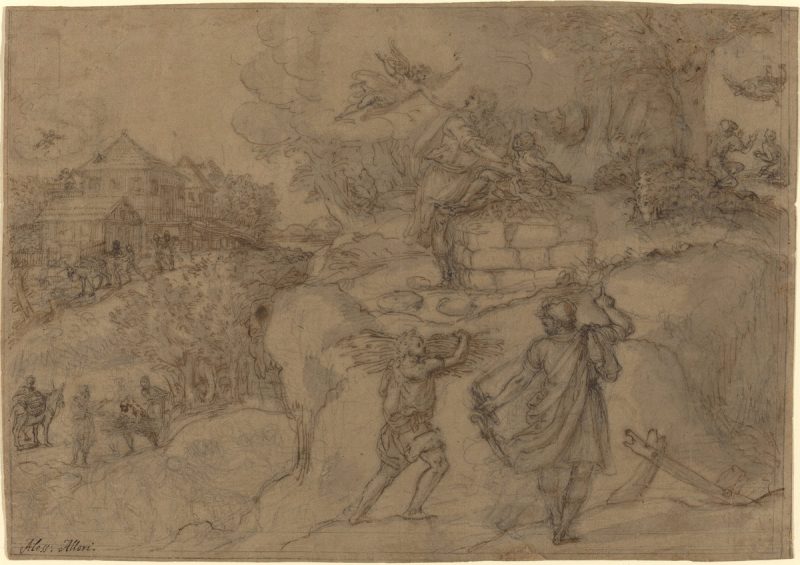 The Sacrifice of Isaac

After a lifetime of infertility, you receive a promise that your offspring will comprise a great nation.
You might hope. 1

Then, imagine twenty-four years later, after your child-bearing years were long gone, receiving another promise that your wife would conceive and have a son.
You might laugh. 3

Imagine a year later actually having a son!
You might rejoice! (Just a guess.) 4

Now…imagine, after years of raising and loving this child, receiving a command to offer him to God as a burnt offering. We’re not talking about dedicating him to the Lord, or sending him away, but actually killing him. Yourself.
You might anguish. You might argue. You might even disobey.

So Abraham rose early in the morning, saddled his donkey, and took two of his young men with him, and his son Isaac. And he cut the wood for the burnt offering and arose and went to the place of which God had told him. 5

Can you imagine? Willing obedience. What could possibly enable such obedience? Only the strongest faith. Faith grounded in a God whose character is good, loving, and absolutely faithful to His promises.

If you read Abraham’s story, you will see that he did not always have this faith. He often doubted. He doubted every aspect of God’s covenant promise to him at one time or another. But through Abraham’s doubt, God proved Himself faithful. And Abraham’s faith grew. It grew to the point that he obediently lifted up the knife to slay his own son.

We can refer to this story as “the sacrifice of Isaac” because, though God stopped him at the last moment, Abraham surely would have done it. Hebrews 11:17-19 says that Abraham, by faith “offered up Isaac,” believing God could raise him from the dead. It says that figuratively, Abraham did receive him back from the dead! His obedience was so complete that it was as if he had actually done it and as if he really had received him back from the dead.

This sacrifice is perhaps the clearest type of Christ (a prophetic symbol that foreshadows Christ) in the Old Testament. If you look carefully at the text, you will see that it is replete with parallels between Isaac and Christ. Let’s look at them. 6

This apparently is extremely rare in the Scripture but we see it with Jesus as well. 7
Jesus’ name was chosen by God rather than his parents.

In Genesis 22:1-16, the word “son” is used thirteen times, three of which refer to Isaac as Abraham’s “only son.” This term should immediately remind the believer of verses like John 3:16–”For God so loved the world that he gave his one and only Son…” . 8
Jesus is God’s Son, offered up by his Father as a sacrifice.

Isaac is described here as being Abraham’s son whom he loves emphasizing the gravity of the sacrifice. Michael Wechsler notes that it is actually rare in the Scriptures for a father/son relationship to be described this way. When God the Father proclaims that Jesus is His Son whom He loves, then, we see the parallel. 9
Jesus is loved by His Father.

“Abraham took the wood of the burnt offering and laid it on Isaac his son. And he took in his hand the fire and the knife. So they went both of them together” (Genesis 22:6).
Jesus carried the cross on which he would be sacrificed. 10

When Isaac saw all the materials for the sacrifice but no lamb, he asked his father about it. Abraham’s response was that God was providing the lamb. In other words, Isaac was the lamb. 11
Jesus is called the Lamb of God that was sacrificed. 12

Clearly, Isaac was old enough and strong enough to run away or keep from being bound and placed on the altar. He went willingly, presumably resting on the tremendous faith of his father that God would raise him from the dead. 13 Jesus said he laid down his life willingly, following the charge he received from his Father, knowing that he would be raised to life. 14
Jesus went willingly onto the cross to die.

So Isaac is clearly a type of Christ, but where do we see substitutionary atonement in this picture? It’s in the provision of the ram. Immediately after God told Abraham to stop, Abraham saw a ram caught in the thicket and offered it on the altar as a substitute for Isaac. Then Abraham called the place ”the LORD Provides.” 16

It was on this very mountain that the Temple was built many years later. 17 The Temple was the center of Jewish worship, the place where the sacrifices were made. Dr. Wechsler notes that the worshiper would bring the sacrifice so the only thing provided for the worshiper was atonement. We will look at the sacrificial system in another post, but *spoiler alert* it points to Christ. The point here is that Abraham’s naming this mountain “the LORD provides” is a significant foreshadowing of the provision God made for our atonement in His Son. His only Son whom He loved, yet offered up in our place. His Son who carried his cross and willingly died upon it…okay, you get it.